Supporting Our Own Slavery

This is from an interesting article originally printed in "The Guardian." I love President Obama and I hope that it's simply too early to evaluate which direction he's going ... "the same old trip," or is he shrewd enough to give the Military Industrial complex what it wants in exchange for breaking off something for the people who elected him later? We'll just have to wait and see. 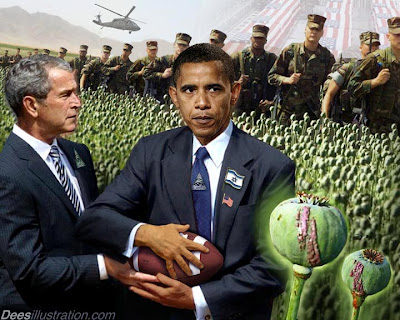 Luther Brook's reprint of The Guardian's story (below) points out the lie behind our "Drug War." It's been close to 30 years and more Americans are in prisons than in any industrial nation on earth. UN Drug Tsar Antonio Maria Costa, estimated that the "Drug Industry" is a $325 billion dollar industry ... and that's probably a low-ball figure. Just ONE example of how dangerous our current drug policies are is privately owned prisons that drain money from the public treasury and places those funds in private pockets.

Drugs and crime chief Costa went on to say that he has uncovered evidence that the $352 Billion dollars of confirmed criminal drug money was effectively laundered by large US and European legal financial institutions. But even more alarming was the report that "the (drug money) was the only liquid investment capital" available to some banks on the brink of collapse last year."

The report further stated that "poppy/opium crops were stopped by Taliban completely in 2001 because it was "un-Islamic". It was only after we invaded that it restarted and crops have increased in size every year since we invaded.

NOTE: Afghanistan is yet another poor country that never invaded by the United States. In 2005, Canadian ex-Minister of Defense Gordon O'Connor reported that heroine is again being produced in that country. The much-demonized Taliban had stopped it. Okay ... so if the poppy/opium production is $300 billion+ industry and Afghanis are dirt poor... who's running it all???

In terms of President Obama's current policy towards I'm not in favor of this quick, knee-jerk reaction that is coming from so many on the Left. The race is early and "our horse" still has a long way to run. But let's face it, all this is occurring within the cauldron of the "American Empire" that has been built on U.S. Banks and our "New Roman Empire Military Forces."

The problem is one of priorities. Have our ruling classes become so greedy that they are blind to how their empty, bottomless desire is running the country into economic and moral ruin? Silly question isn't it?

As we look for solutions to our current state of economic and moral decay, we have to realize how important drugs are to keeping us imprisoned and existing in lives of hopelessness and lovelessness. I don’t care if it’s marijuana, Crystal Meth, Cocaine or heroine, you can’t yearn to enjoy any part of “God’s Full Bounty” if we’re choosing to live in the Hells of addiction and demoralization.

Posted by Journeyman at 3:14 PM